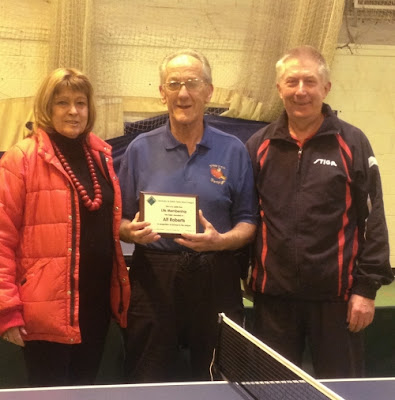 It is with great sadness that we report the passing of Alf Roberts on November 11th. Alf was part of the table tennis scene in North Wales for very many years, serving on the Llandudno League Committee as a committee member, and more recently as League President. He was made a Life Member of the League in recognition of his service to local table tennis in 2013 - the photo above shows him with his award, which he received from Pru Oakes (League President at the time) and Paul Collins (League Chair). He will be sorely missed.
Posted by kath-b at 18:39

As of Sat 21st March 2020 as instructed by the UK government  Trefnant Village Hall and associated group meetings and events will be closed until we are permitted to re-open.

There will be a monthly review on the situation and we will respond accordingly.

If other clubs/venues have any updates on their venues going forward please supply information and I will post here.
Posted by Sean Lucas at 20:47

Closed Tournament on hold at present.

For those that go for knock at Y Morfa Chris has posted:

"Due to the recent government guidelines and recommendations about social distancing, Y Morfa Community Table Tennis Club will be temporarily suspended until Tuesday 21 April 2020 when the situation will be reviewed again".

If anyone has any questions or queries about the suspension of club activities, please contact Chris Henderson on 07824 994 315.

If other clubs/venues have any updates on their venues going forward please supply information and I will post here.

Suspension of the League

After much deliberation and in unprecedented circumstances, the Committee has decided to suspend all Llandudno Table Tennis activities immediately until further notice.

The CV19 virus and Government action and advise has escalated quickly and so, the Committee now feel, that to protect members of the League from being exposed to unnecessary risk of cross contamination, that we have taken this step.

I'm sure that each club will have their own plans for playing socially and I wish you all well.

I'm sure we will come through this dark time soon, in the meantime take care & stay safe.

2019/20 Season Closed Tournament
Tuesday 14th April 2020, 7.00pm @ Y Morfa Leisure Centre
Players entering must have played at least one league game this season. Games will start promptly at 7.15pm. Pleases arrive at 7.00 to help with the set-up. The doubles competition will be drawn on the night and will be the first competition played.

Please return by Wednesday April 8th 2020 to Sean Lucas email: seanlucas1963@btinternet.com or indicate by email which events you wish to enter (if you don’t have access to email, Sean will accept entries by telephone – 01745 813810). Please note that, although Sean will accept late entries, if sufficient entries to make the tournament worthwhile have not been received by April 8th 2020 the event will be cancelled.

-        ‘Closed Singles’ is open to all players and will be played initially in groups to guarantee games, no consolation competition.
-        ‘Division 2 Singles’ will be in a knockout format, seeded using current individual averages.
-        ‘Drawn Doubles’ Partners will be drawn on the night and it will be a straight knockout competition
Posted by Sean Lucas at 06:35

Players are not allowed to play for two different teams in a cup competition. Captains be careful borrowing/lending players.

The new date for the Llandudno Closed Tournament is Tuesday 14th April. It is open to all players in the league who have played at least one league game and is free. Hopefully a Tuesday evening will draw a bigger entry than the weekend closed tournaments of recent seasons. The night will have the closed singles, division two singles, ladies and a drawn doubles competition. Entry forms and further details to follow.

The draws for the next round of cup competitions are now on this site and have been sent to the club captains via email.
Posted by Sean Lucas at 12:58

More cup information for the 2020 season.

Handicap Cup:
Five serves each, start at 0-0 and change ends when first person gets to twenty.
Only three players allowed - no changes to the chosen team in the doubles.
Add the three chosen players handicaps together to find your team handicap.
The team handicaps is added to your final score or you could start from that number and keep a running total.
If the scores are the same at the end of the match the away team wins.

This season the old scoring system applies, that is the maximum score is 10-0 not the 30-0 that is being used in league matches.
If the scores are the same at the end of the match (5-5), whichever team has won the most 'games' wins the tie, if games are equal then the highest number of points wins it and if it is still level then the away team wins the tie.

Please prioritise cup matches over league matches and make every effort to play the cup games in the week designated.
Posted by Sean Lucas at 12:59

Games to be played to forty, change ends at twenty.
If game is drawn the tie will be awarded to the away team.
Please ensure that the round of 16 games are played week commencing 20th Jan.
Posted by Sean Lucas at 08:47